Our repertoire of tales for all ages and occasions continues to expand, so do check this page for updates!  We also offer a number of creative and educational workshops, either alongside particular productions or as standalone events.  You can read more about all of these - and the other events we offer - in our Shadow Road Productions brochure and on the Workshops page of the main Shadow Road website..

Should you have any trouble choosing a particular folktale or workshop, we are very happy to advise further on which one might work best for your event.

If you are interested in booking us for an event but you are looking for a folktale you do not see listed here, please get in touch.  If we do not already have a version of the tale that interests you in the works, we can discuss creating one for you.

A CHRISTMAS CAROL (c. 90 mins, best performed with an interval) 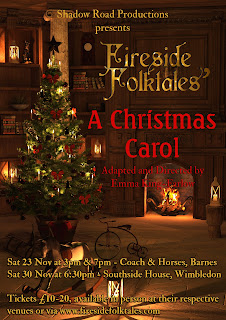 “If I could work my will, every idiot who goes about with ‘Merry Christmas’ on his lips, should be boiled with his own pudding, and buried with a stake of holly through his heart.” Ebenezer Scrooge is a mean, miserly loner, destined to spend his afterlife making up for all the mistakes he made on earth – until, that is, a chilling encounter with the spectre of his late business partner, Jacob Marley, sets him on a different path.  Can Marley’s ghost – and those of Christmas Past, Present and Future – transform the unfortunate Scrooge in time, or is it already too late to save him? See this charming Fireside Folktales adaptation of the classic Christmas tale by Charles Dickens and find out for yourself…

~ A Christmas Carol would be an obvious choice for venues looking for festive entertainment for the visiting public; for Christmas celebrations, whether private or corporate; for Dickens fans and for school groups, many of whom are studying the novella as part of the curriculum. 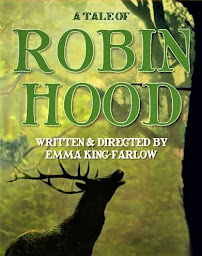 With King Richard the Lionheart absent, corruption and injustice are rife in England.  The country cries out for a champion – and in the heart of the forest, a legend stirs...
Join Robin and his friends on a daring mission to save Sir Guy of Gisborne’s prisoners from the hangman's noose.

~ A Tale of Robin Hood: The Rescue would be a particularly suitable choice for weddings, as it features a lovely medieval wedding and reception of its own!  It has also proved popular with fans of action, adventure, and English myths and legends! 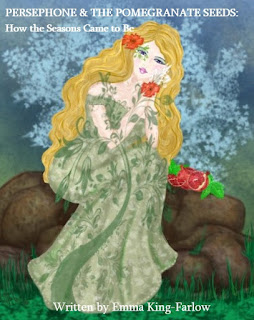 There are many versions of the classic Greek myth that explains how the seasons came to be – this is ours!  Learn how close the goddess Demeter came to destroying the world when her beloved daughter Persephone was stolen away by Hades, the lord of the Underworld – and how Zeus and Hermes searched for a solution that everyone could live with.  Were they successful?  You’ll have to see the show to find out…

~ Persephone & the Pomegranate Seeds would be a particularly suitable choice for anyone (school groups or otherwise) interested in Greek myths. It could also work for weddings, as it features a somewhat unusual but moving romance! 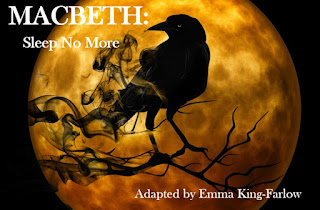 “All hail Macbeth that shalt be King hereafter…”  With these portentous words, the three witches seal the fate of not only the Thane of Glamis himself but also all the others whom Macbeth will dispose of on the way to fulfilling their deadly prophecy.
Fireside Folktales brings you a condensed version of this widely-studied Shakespeare classic that retells the old story of the 11th Century Scottish King and examines the physical and psychological damage done by political ambition, both to those who seek power for its own sake and to those who get in their way…

This electrifying new adaptation of Shakespeare’s infamous tragedy is the darkest entry yet in the Fireside Folktales collection. Containing some original material, it nevertheless remains true to its source, both in tone and content.

~ Macbeth would be an obvious choice for school groups, many of whom are studying the play as part of the curriculum. It would also be a particularly good choice for Shakespeare-lovers, as an introduction to someone new to Shakespeare, or for anyone looking for some original Halloween entertainment!

We can provide a specific workshop to accompany this production upon request.

For our younger audiences: 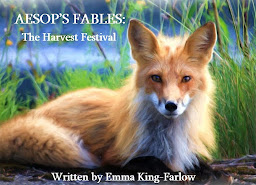 Three of Aesop's classic fables – The Ants & The Grasshopper, The Fox & The Stork and The Hare & The Tortoise – have been woven together into this delightful, funny and engaging play for children of all ages.  Harvest time is nearly here and there’s still so much work for the animals to do to make sure they will last through the winter.  Can they put their disagreements aside and get the job done in time for the festival?

~ Aesop's Fables: The Harvest Festival would work particularly well at children's birthday parties or as the entertainment for children at grown-up events, such as village fetes, corporate parties, weddings or other private celebrations. It will also appeal to animal lovers and anyone interested in the lessons that fables have to teach! 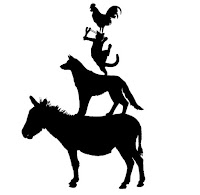 After a lifetime of hard work, four loyal old animals are each in danger of being put to death or sold by their unkind masters, who only valued them for the service they could offer while young and strong. Banding together, they decide to run away and head to the town of Bremen, where they hope to become musicians and sing - rather than slave - for their supper. Making their way through the deep, dark forest at night, however, they spy a glimmering light through the trees - and another rather more dangerous, but ultimately rewarding, option presents itself...

~ The Musicians of Bremen would work particularly well at children's birthday parties or as the entertainment for children at grown-up events, such as village fetes, corporate parties, weddings or other private celebrations. It will also appeal to animal lovers and anyone interested in European myths and fairytales!

Please note: This play will include mild staged fighting and therefore may suit a slightly older audience than Aesop's Fables.