Have you ever wanted to act? Or perhaps you are already a keen actor - amateur or professional - who's been missing the chance to tread the boards, to be part of a company, working together to create a piece of theatrical magic?  Would you like to take part in a performance you can invite your friends and family to attend (for free!) and show them what you've been doing with your time and your talents?  If so, we have just the short course for you!

In either five consecutive evenings (6.30pm-9.30pm each day) or two days (10am-5.30pm), we will guide you through the rehearsal process for our one-act play Persephone & the Pomegranate Seeds (a retelling of the classic Greek myth which we have been performing in various venues since May 2019), from beginning to end.  All costumes and props will be provided, and the rehearsal process will include everything from the initial readthrough and working through the text together, to sessions focusing on character, a basic introduction to stage combat, a dress rehearsal, and a final production that you can invite your friends and family to!

We will be running these courses for the first time - though they have been in the pipeline for a while now - at the end of this month, during the week of half term, beginning on October 26th.  If you are interested in finding out more and possibly signing up, please visit THIS PAGE on our website for further information and to book your spot.

Places are strictly limited, with a maximum of six students for each of the two courses, ensuring that everyone gets the most possible out of the experience.  For these first runs we are also offering a one time only 25% discount off the standard price, so if you would like to book a place, please don't delay - we'd love to see you there!

Please note that social distancing will be observed - if you are attending together with someone from your household or support bubble, please let us know!  - but we are confident that this will not interfere with your enjoyment of the course.  All props etc will be rigorously sanitised, and students' temperatures taken before each rehearsal. In the event of the course having to be cancelled due to any change in government regulations, you will be offered a full refund.  If you have any further questions or queries, don't hesitate to get in touch.

NOTE: We also have some places on each course available for free - or what you can afford - to those unable to pay the stated price.  To apply for one of these bursaries, please fill out THIS FORM and we'll get back to you ASAP!

Posted by Fireside Folktales at 21:13 No comments:

We have just closed our fantastic Fireside Folktales in the Garden week, having enjoyed seven magical days of wonderful performances, wildly varying weather, and audiences of all ages both excited to see live theatre making a return and delighted by the different plays they were watching! 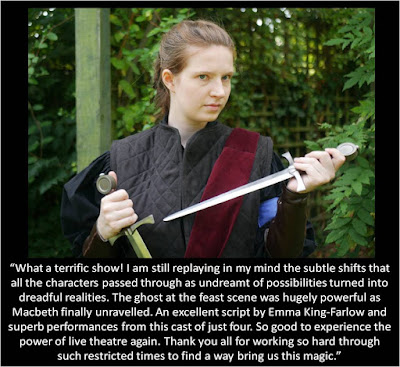 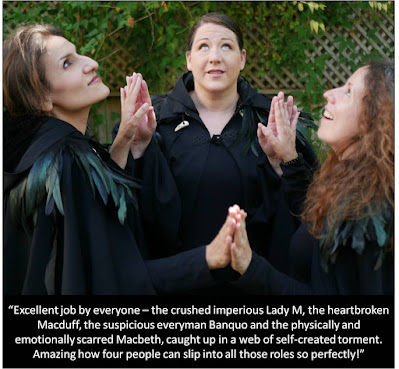 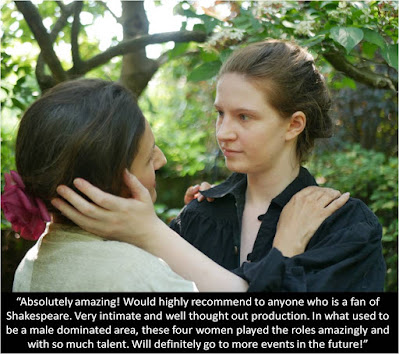 “Absolutely fantastic! Very enjoyable performance. Thank you so much, hard to believe that was just four people! Magnificent!”

MACBETH: SLEEP NO MORE is on at The Coach & Horses, Barnes SW13 9LW
on Wednesday 2nd & Thursday 10th September at 6pm
- tickets, including a special Family Ticket offer, are available from www.ticketsource.co.uk/shadowroad -

at The Turbine Theatre on the Jetty on Wednesday 9th September at 8pm - tickets HERE.

Posted by Fireside Folktales at 19:27 No comments: 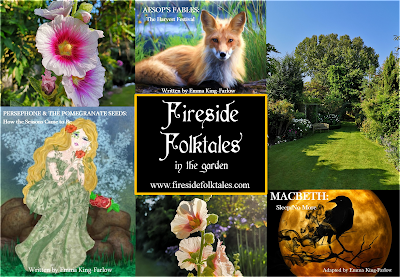 After a year in which theatre has been all too thin on the ground, we are thrilled to get back in front of an audience this August! Not only will we be reprising two of Fireside Folktales’ hugely popular productions – the spellbinding myth Persephone & the Pomegranate Seeds and children’s favourite Aesop’s Fables – but we will also be premiering our powerful new adaptation of Macbeth!
These productions will be staged in a beautiful private garden in Barnes, South West London – the precise address of which will be sent with your purchased ticket. In order to ensure that social distancing guidelines are adhered to, ticket numbers will be limited and audience members seated in household groups, each an appropriate distance from any others.
Performances are due to run from Thursday 20th to Wednesday 26th August (details below). Set against an enchanting outdoor backdrop, in a stunning and spacious garden not usually accessible to the public, this promises to be one of our most magical performances yet!
Book your tickets for this exclusive run by clicking here!
* * * * * * * 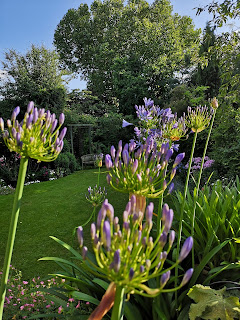 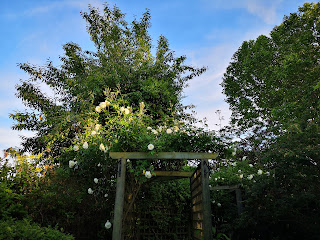 ~ All tickets purchased in a single order will be assumed to belong to the same household and seated accordingly. Should your group include more than one household (e.g. two groups of friends who need to maintain the appropriate social distance from each other) please purchase the tickets in two separate orders.
~ Audience members are asked to bring their own blankets or cushions (or both!) to make themselves comfortable on the grass.*
*If any of your party requires an upright chair or camping stool for medical reasons, please email us at firesidefolktales@gmail.com in advance and we will supply one.
Thank you!
* * * * * * *
A REMINDER OF THE SHOWS...

Running time - 2 hours including an interval; the play contains sword fighting & staged violence.
“All hail Macbeth that shalt be King hereafter…”
With these portentous words, the three witches seal the fate of not only the Thane of Glamis himself but also all the others whom Macbeth will dispose of on the way to fulfilling their deadly prophecy.
Shadow Road brings you the condensed Fireside Folktales version of this widely-studied Shakespeare classic that retells the old story of the 11th Century Scottish King and examines the physical and psychological damage done by political ambition, both to those who seek power for its own sake and to those who get in their way…
This electrifying new adaptation of Shakespeare’s infamous tragedy features a small amount of original material, but nevertheless remains true to its source, both in tone and content.
* * * 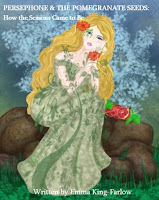 Running time - 45 minutes; includes mild staged violence and sword fighting.
There are many versions of the classic Greek myth that explains how the seasons came to be – this is ours!
Learn how close the goddess Demeter came to destroying the world when her beloved daughter Persephone was stolen away by Hades, the lord of the Underworld – and how Zeus and Hermes searched for a solution that everyone could live with. Were they successful? You’ll have to see the show to find out…
* * *

Running time: 30 minutes.
Three of Aesop’s classic fables – The Ants & The Grasshopper, The Fox & The Stork and The Hare & The Tortoise – have been woven together into this delightful, funny and engaging play for children of all ages.

Harvest time is nearly here and there’s still so much work for the animals to do to make sure they will last through the winter.  Can they put their disagreements aside and get the job done in time for the festival?
Posted by Fireside Folktales at 22:58 No comments:

Like so many other people and organisations, our plans for 2020 have been rather radically disrupted by the current situation - perhaps even more so than some, given that we are all freelancers  and performing artists. While we wait with everyone else to hear how the rest of the spring and  summer will pan out, however, we have kept ourselves busy tackling some of the mountain of theatrical admin that piled up over the winter - and writing some new plays!

One piece of long-planned, never-previously-executed admin is the creation of this beautiful new Patreon page for Shadow Road Productions - hooray!  We'll be posting regular updates there (some for everyone, others exclusively for our Patrons), and we very much hope you'll enjoy visiting it and getting to know us - and that you'll feel free to join in with our little community wherever possible.

Thank you and see you soon - stay safe in the meantime! :-)
Posted by Fireside Folktales at 22:55 No comments:

“Sometimes reality is too complex. Stories give it form.”
Jean Luc Godard

“When I was ten, I read fairy tales in secret and would have been ashamed if I had been found doing so. Now that I am fifty, I read them openly. When I became a man I put away childish things, including the fear of childishness and the desire to be very grown up.”
C.S. Lewis (1898-1963)

“Fairy tales were not my escape from reality as a child; rather, they were my reality - for mine was a world in which good and evil were not abstract concepts, and like fairy-tale heroines, no magic would save me unless I had the wit and heart and courage to use it widely.”
Terri Windling (1958-)